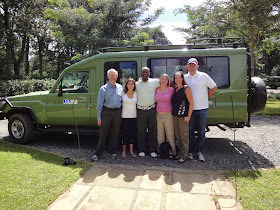 Upon leaving beautiful, vibrant Zanzibar, I hopped a 10-seat plane (yes, you could see the pilot and out the front window) to Arusha, Tanzania to start my 6-night safari to the Northern Parks: the famous Serengeti, Ngorongoro Crater, Tarangire National Park and Lake Manyara.

I joined a group with Bob and Daniele, a father and daughter from the Upper East Side (small world!) and a fun couple from Birmingham, England, Jane and John. Tack on a few Kiwi friends we made from another jeep guided by Geoffrey, our guide's best man, and we had a lovely time.
I fear the safari may have spoiled me a bit since t 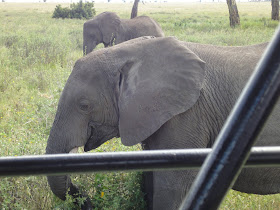 he lodges were quite nice, with good service (and okay singing), great showers (ah, water pressure!), stunning views and plentiful food (of varying tastiness). My fellow safari goers thought it was quite amusing that I was critiquing the rooms by the end, knowing I would be back to backpacker accommodations within days- oh well!
I guess if I had thought about it I would have figured that safari is not an activity for the young--- must be what the retired do after cruising to Alaska. Suppose not a surprise since all you do is sit, sit and sit some more while driving hundreds of kilometers in search of animals.
Search we did, and thanks to Robert (our incredibly knowledgeable and patient guide) and Jane (who had a good eye for lions and rocks), animals are what we found. 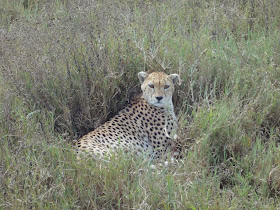 We saw the 'Big 5'- leopard, lion, buffalo, rhino and elephant, plus a whole lot more: hyena, wildebeest, flamingo, cheetah, zebra, gazelles, impala, warthog, monkey, baboon, elan, jackal, lots of birds, giraffe, hippo, zebra, zebra and more zebra, to name a few.
Sure, there were times we got a little bored and jaded of zebra and wildebeest-- so we just drove Robert crazy with requests for random animals we hadn't yet seen (damn, that bat eared fox eluded us!) and babbled on about random topics including a lot of football talk with John.
The Serengeti is HUGE, so it sometimes took hours of driving the expanse to see wildlife; however, we were fortunate to see the beginnings of the Great Migration, when all the Wildebeest congregate and head up to the Masa Mara in Kenya. There were thousands grazing as far as the eye could see, with their friend the Zebra (apparently they complement each other). 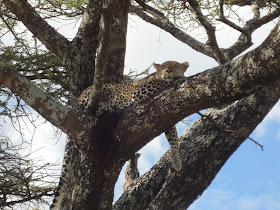 We were also lucky enough to see a Leopard (the most elusive of the Big 5) dozing in a tree right above our land cruiser thanks to some clever (aka pushy/bold/speedy) driving by Robert.
The Crater was animal-rific since they are roaming a fairly small area (101 sq miles), in the world's largest unbroken volcanic caldera created 2-3 million years ago. Here we spotted our first rhino with baby (there were a lot of baby sightings from every animal) and cheetah right next to us (again, thanks to some aggressive driving by Robert that maybe pissed off the other jeeps- oops!). In all the parks, it was pretty amazing how close you could get to the animals- just don't get out of the jeep (Robert explained pretty convincingly how I would be stepped on by an elephant). 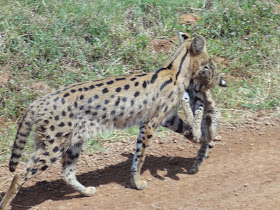 The highlight however was the Serval cat mother and baby! We watched forever as mom became increasingly frustrated with a baby that simply refused to walk back to their den--- she'd yell at him, pick him up and carry him in her mouth for a few steps and drop him in the middle of the road, just to have him run back into the bush to nap. This was repeated over and over again to the point that we were all frustrated for poor mom and thought maybe this might be the kill we had been expecting. ;-)
Oh, and the monkey jumping in our jeep, opening a lunch box, taking a samosa and politely closing the box, all within seconds, was another bit of amusement (right in front of the "Don't feed animals" sign, nonetheless!) 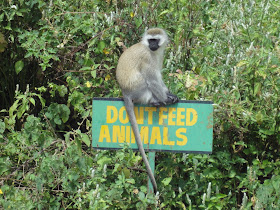 On the way to Tarangire National Park, home to the hugest elephants ever, we stopped at Olduvai Gorge, the archaeological site where the earliest traces of man were discovered (this did not ring a bell with me, but perhaps those with a good elementary school education recall?)
Next stop, a quick visit to a Masai village where we were given a tour of their huts, plus a demonstration of number counting by the kids and traditional singing and dancing by the adults. It was interesting, but tours of native villages always make me a bit uncomfortable. It was cool to be able to determine who was married and single based on the color of their clothes- perhaps we should bring this tradition back to NYC?? Robert, being a Masai himself, was great about filling us in on all their customs. 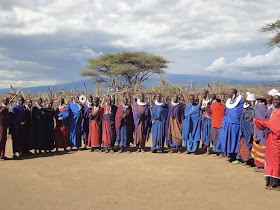 Tarangire, our cool down as Robert referred to it, was chock full of elephants and a little relaxation since we were coming to the end of our safari.
It was a lovely time, and with the exception of some rather obscure animals, we managed to see just about everything in Frommer's wildlife section. If you see a Bush Baby or Genet let me know.
Jen at 10:17 AM
Share